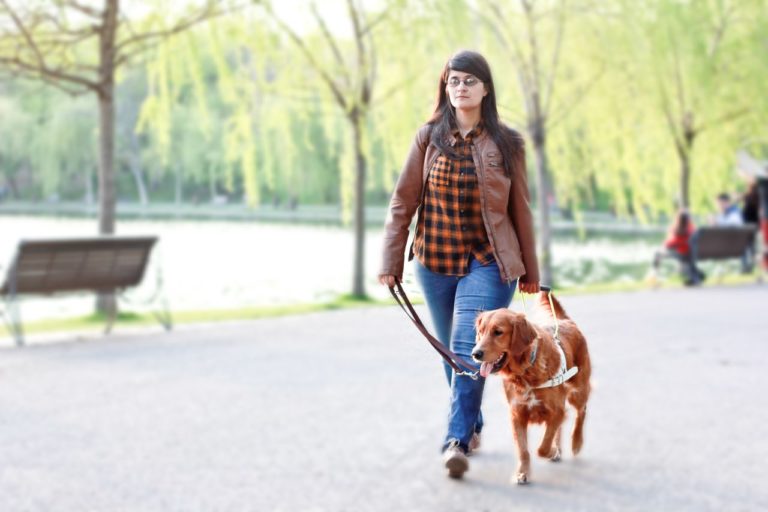 Alexandra was born in Targoviste and moved to Bucharest when she was 15. She then attended the Regina Elisabeta High School for students with visual impairments. She suffers from a rare hereditary ophthalmic disease resulting in very restricted sight, prompting her parents to steer her towards special education.
“I met representatives from Light into Europe as part of my activities at the Special Secondary School for the Visually Impaired,” says Alexandra, “where I work as a Special Education teacher.”
Four years ago she was approached with the project “Guide Dogs for the Blind.”
“The thought of having a canine helper made me very happy,” says Alexandra, “I have always loved animals and particularly dogs.
In addition, I needed help with all my many and varied travels.”
After going through the initial steps before training, Alexandra then had to wait a while until she got a guide dog, Bonnie.
“I had an emotional tie with Bonnie from the first moment,” says Alexandra, “because I love animals, but to develop a real partnership took around five-to-six months. Bonnie and I have been together since May 2016 but now I feel that we have been together for life!”
The advanced training with Bonnie took two-to-three weeks total dedication and included all aspects of physical and emotional development.
“For me, the most difficult things to learn were cumulative, like linking exact movements to various commands,” says Alexandra. “I was upset when things went wrong and worked hard to prevent relapse.”
Since Alexandra has had Bonnie, they go on the daily routes they learned during their training, as well as new ones.
“We have experienced Bucharest and Targoviste, as well as other new places,” says Alexandra. “The first day in any new place we explore gradually, of course. Bonnie is used to Bucharest, a big, crowded city, so does an excellent job in other locations.”

The main routes which Bonnie knows were already familiar to Alexandra, but now she can relax a bit as Bonnie pays attention to the road, people and especially any new obstacles they encounter.
“I have become more independent and active with her,” says Alexandra. “We go to the park or a certain enclosure almost every day.
Bonnie is very much admired there and as a result I have made new friends.”
Alexandra is very grateful to Mark Platt (UK Director of Light into Europe), who was Bonnie’s main puppy walker in the UK. Bonnie lived with Mark and his family for eight months. During her training, Bonnie was taken to a variety of places, including local authority offices, schools and shops as an essential part of her development. “I would advise any blind person that they would become increasingly more independent with a guide dog,” says Alexandra.
“If such a dog receives trust and affection she gives you back trust, affection and security.”
Alexandra believes there are many things the government can do for the blind with goodwill and commitment.
“The most important for me at the moment is to improve accessibility,” says Alexandra, “which is in fact legal in many institutions, such as hospitals, restaurants, shops etc. After this, accessibility to means of transport, audible signals for buses, trams etc., audible traffic lights, prevention of parking cars on the pavement, and so on.”

Manage Cookie Consent
To provide the best experiences, we use technologies like cookies to store and/or access device information. Consenting to these technologies will allow us to process data such as browsing behavior or unique IDs on this site. Not consenting or withdrawing consent, may adversely affect certain features and functions.
Manage options Manage services Manage vendors Read more about these purposes
View preferences
{title} {title} {title}